When people come to Georgia, it’s common for them to also travel around the Caucasus. However, it’s tough to find good transportation options between countries. We offer you a comfortable experience of Tbilisi Yerevan Transfer and vice-versa.

To make the Tbilisi Yerevan Transfer more fun, we can make it a tour! We can include stops at Akhtala, Haghpat UNESCO world heritage sight and the breathtaking lake of Sevan.

When people come to Georgia, it’s common for them to also travel around the Caucasus. However, it’s tough to find good transportation options between countries. We offer you a comfortable experience of Tbilisi Yerevan Transfer and vice-versa.

To make the Tbilisi Yerevan Transfer more fun, we can make it a tour! We can include stops at Akhtala, Haghpat UNESCO world heritage sight and the breathtaking lake of Sevan.

Please fill out the form below to submit a booking. YOU WILL NOT BE CHARGED NOW.
Important information before visiting Armenia

Even though Armenians are very open-hearted people, country requires visas in many cases. We recommend that you check if you need a visa to Armenia on the official website of Ministry of Foreign Affairs of Armenia at the following link:

Do I need a Visa to Armenia?

Here you can also find the countries which are entitled to the visa on arrival:

Can I get visa on arrival in Armenia?

Armenia uses it’s own currency called the “Dram”. If heading from Tbilisi to Yerevan, the best place to exchange money for the day is at the Border Crossing. You can ask the driver to stop at the exchange booth and there you can easily exchange GEL or USD to Drams. Note that you will get better rates in Yerevan, however between the Border and the capital, this is the best rate.

You can find the current exchange rates for most major currencies bellow:

What Places Can We Visit If We Take The Tour Option?

If you decide to turn your Tbilisi Yerevan Transfer into a tour (and you definitely should!) there are couple of spots we can visit on the way:

Founded in the X Century – Local rulers built The Monastery & Fortress of Akhtala as a defensive unit for the locals. During numerous invasions Armenian’s lived through,people living in the nearby villages would take shelter in the safety of the walls of the castle.

There are multiple buildings located within the fortress walls – including Monastery Complex with 3 Churches. As for the Main Church – St. Astvatsatsasin Mkhargrzeli brothers constructed it in the 13th century. It’s a very unique church because of the mixed Georgian & Armenian Cultures. The Mkhargrzeli brothers were of Armenian Heritage, however they grew up on the Georgian court and practiced a mix of the two cultures.

Within the walls of the Astvatsasin church there are stunning murals chronologically depicting biblical scenes and also showing images of heaven and hell. With the help of Greek Monks, local artists painted the frescoes using only locally produced pigments. Including one made of bugs blood! The colors are still very vivid and the overall experience is very memorable.

Akhtala Fortress is located on a beautiful hill and offers a stunning view of the surroundings.

UNESCO World Heritage Sights of Haghpat and Sanahin Monastery Complexes, both of themdated back to the 10th century! Being Huge religious and educational centers of Armenia these monasteries played a big role in preserving the Armenian Culture.

King Abbas Bagratuni built The Monastery of Haghpat between 929-953 AD. However, he only constructed thethe first church – Surp Nshan. The rest of the Monastery got it’s current form in the 12th century.

Today the Monastery boasts a big number of impressive Churches, Gavits, A Repository, A dine hall and a huge bell tower.

One of the gems of the Monastery is the Gavit of the Astvatsatsin Church. It’s known for it’s unique architecture. Also, a famous Armenian Movie – Taste of a Pomegranate by Parajanov was filmed here.

Monastery is also a home to exquisite Khachkars (Armenian Cross Stones) which have been preserved by the monastery and also donated to it in the nearest past.

The Monastery of Sanahin is located right next to the ghost city of Alaverdi. As both the Sanahin and Hagphat Monasteries were built in the same periods, they resemble each other. However, Haghpat is a lot larger and more impressive. If you have to make a choice between the two – We recommend you take Haghpat.

This complex used to be one of the biggest educational centers of Armenia. During your visit you will notice the Academy walkway between the two main churches of the monastery.

Also, Sanahin is known for the rare depiction of Kings Gurgen and Smbat.

As of now (11/12/2018) Sanahin Monastery is going through rehabilitation process and is partly closed.

Sevan lake is the biggest lake in Armenia and is known for it’s pristine beauty. People from all over Armenia and the world come here to enjoy this beautiful resort year-round.

“The Blue-eyed beauty” of Armenia – Lake Sevan, in earlier days known as the “Sea of Gegham” is also one of the biggest natural mountain lakes in the world. It’s located at 1900 meters from sea level.

The lake is of a volcanic formation: thousands of years ago a volcanic eruption blocked of a river which built up into a huge pool currently known as the Lake Sevan.

In 1938, Soviet Union decided to use the lake for generating hydro-energy – this would prove to be a big mistake. As a result, the whole ecosystem of the Lake Sevan changed and the well known island where Sevanavank was located became a peninsula.

As for the Sevanavank Monastery, it is dated back to the 10th century and used to be a “monk prison” – back in the day, this monastery was located on an island and the monks that had sinned would be sent to this monastery as a punishment.

Can We Stop For Lunch?

As you will be having a long day, you will definitely be hungry. There’s two ways you can deal with this: You can Pack Snacks or we can make an optional stop at one of the roadside restaurants or local fast-food spots that serve delicious Armenian food and you’ll have an opportunity to enjoy the wonders of the Armenian cuisine.

Have any other questions about the Tbilisi Yerevan Transfer?

We couldn’t answer your question? Let us know by following this link: Contact Us

We Hope this page has helped you at least a little :) We thank you for your time and consideration 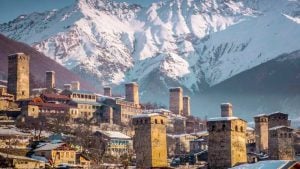