Choosing between the cave cities of Georgia

One of the highlights of visiting Georgia is exploring its ancient cave cities. Uplistsikhe, Vardzia and Davit-Gareja, might look somewhat similar but all three of them are radically different from each other. In this article, we will discuss the differences and similarities between these three cave cities and hopefully help you answer your question – which cave city should I go to?

Though it’s a thing of preference, we will try to describe all of the cave cities in Georgia with all must-know facts, so the choice is easier for you. If you have a chance, we recommend to visit all three, as each of them is unique in its own way – if not, well, it’s a tough choice.

Please note that the sights are sorted in no particular order.

Vardzia is by far the largest cave city in Georgia, it’s basically an 12th century take on apartment blocks. This secret city is located in the southern part of Georgia, in the Samtskhe-Javakheti region, very close to the current Turkish border.

Originally, Vardzia was constructed as a secret shelter – something that you can not really tell by looking at the picture above (doesn’t seem very secret, does it?) – Well, the thing is, originally it was completely carved into stone and all of the dwellings you see exposed on the picture were located under tons and tons of rock. It’s due to later earthquakes that Vardzia can now be spotted somewhat easily.

Upon its construction, Vardzia was said to fit 30,000 people with their cattle in its shelters. It had a sophisticated ventilation and water-supply network, very uncommon for its time.

Even though, Vardzia is called a cave-city, it never really functioned as a city – it was only a shelter for the invasion times, when the locals needed to stay away from enemies.

Vardzia is by far the most beautiful cave city in Georgia, however it is located a 4 hour driver from Tbilisi and it can be tough to reach with a One day tour – it’s possible and we do it, but it makes for a very long day trip – about 14 hours in total, but you can also visit Rabati Fortress and Khertvisi along the way, which makes the day a fun sightseeing trip.

It’s important to note that in the summer times, you can also visit the Paravani lake when you visit Vardzia, truly a unique natural setting worth seeing, however in the winter & early spring, the roads to Paravani Lake can be closed because of excess snow. 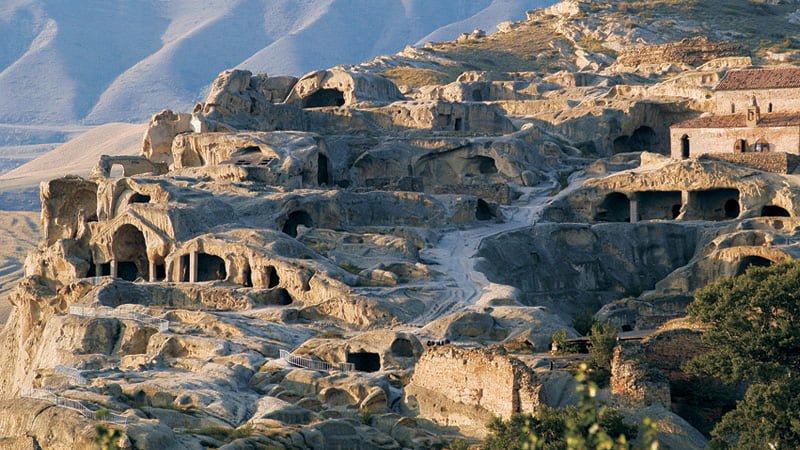 Uplistsikhe is the oldest out of the three – constructed in the 4th century BC. Located 1 hour drive from Tbilisi, in the Kvemo Kartli Region, situated at the bank of the Mtkvari river.

Originally, Uplistsikhe – translated as “the fortress of the lord”, was built by pagans as a holy city. Before the adaptation of Christianity, Georgia was mostly pagan, with Uplistsikhe being the center of the religion in Georgia. The high priests of the Pagan order lived here and worshiped their deities. Their services included many rituals as well as animal and human sacrifice.

Cave city of Uplistsikhe is spread on almost 4 hectares of land and boasts many types of buildings, from temples to premium housing, as well as later on Christian additions to the complex. This city fortress was an unconquered fortress for almost 1800 years, which was mostly due to its location, secret water and food supplies, as well as a great fortification wall.

Visiting Uplistsikhe is an absolute must when visiting Georgia – especially because it’s located so close to the capital. Usually, it’s best to visit Uplistsikhe, with a trip to Mtskheta & Gori – This way you hear all about the transitions in Georgia’s religious past – from Paganism to Christianity, from Christianity to Atheism and than back to Christianity again. Also, you will learn about the interesting bonds between paganism and Georgian Christianity.

Uplistsikhe is open year-round and it’s only closed for official Georgian holidays. So no excuses to miss this amazing place 🙂

Last but not least is Davit-Gareja (Davitgareji), which is completely different from the two cave cities mentioned above. Davit Gareja dates back to the 6th century AD, when Davit Garejeli an Asyrian monk, carved out first couple of caves here, with his student Dodo.

Davit-Gareja was and still is a Christian Monastery which is the main thing that makes it unique. This complex was also the cradle of the Georgian fresco painting, unique Georgian mural painting styles originated here, based on Greek and Byzantine influences. Here you have a chance to take a look at 1000-year-old paintings and you should do it quick. Unfortunately, because the monastery is located on a disputed border between Georgia and Azerbaijan, the monastery and murals are not maintained or protected.

Important to note that the road going to Davit-Gareja is not in a great condition. Even though the Lavra Complex is located only about 80 km outside of Tbilisi, it takes about 2 hours of driving to get to the monastery.

There is no public transport going to Davit-Gareji and the monastery is best to explore with a trip from Tbilisi. With this trip, you will visit the monastery with a knowledgeable guide who will take you through the centuries of the history.

Important note: As of now – December 2019, Part of the monastery is inaccessible because of Political tensions between Georgia and Azerbaijan. Monastery is still safe to visit, there are no safety threats.

We hope this article has helped you make the tough call between the cave cities of Georgia. Again, if you have enough time, we recommend to visit all of them. If not, Uplistsikhe and Davit-Gareji should be a good start.

If you didn’t find what you were looking for, or if you have any extra questions, please contact us via e-mail: [email protected] and we will do our best to help you!

We thank you for choosing Georgia as your travel destination and wish you happy travels!